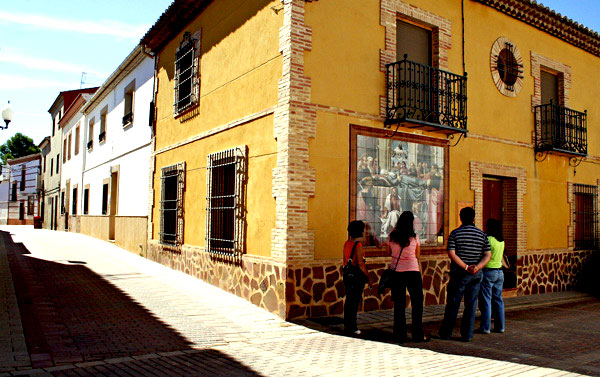 Fernando Yáñez de la Almedina can be considered, in the words of Elías Tormo (Spanish literary and art critic, jurist, historian, archaeologist and politician), as the “most exquisite painter of the Renaissance in Spain.”

The first reference to Fernando Yáñez dates back to 1506, a document in which the payment for the making of the altarpiece paintings of the Holy Doctors of the Cathedral of Valencia, together with Fernando Llanos, known as the Hernandos as a whole, was recorded. In the Apologetic Discourses in which the art of painting is defended, by Juan Butrón 1623, he is attributed the authorship of the disappeared altarpiece in the parish church of Almedina. The historians Lázaro Díaz del Valle and Antonio Palomino also refer to an epigram that Quevedo dedicated to this painter, who is now missing.

After the work of the altarpiece in the cathedral of Valencia, together with Fernando Llanos, he was commissioned to paint the main altarpiece, and the painting of a carving of the Virgin for the same cathedral. Both provided paintings and traces to the altarpiece of the Church of Santa Catalina in the same city of Valencia.

The painter continued his work in conjunction with Llanos, as well as his solo career.

It is in 1518, it appears documented in Almedina, where he went to carry out the paintings of the main altarpiece of the parish church. A year later he is cited again in Almedina, in a Baptism game as “Ferrrandiañes, painter”, and the mentions in the parish books continue on the occasion of the baptisms of his children.

Yañez was in Cuenca in 1525, where he granted power declaring himself a neighbor of Almedina, to collect debts that he had pending in Valencia. From 1526 to 1531 he worked in the Cathedral of Cuenca and reappeared again in Almedina in 1532 until October 1537, the last documentary data on record. Also noteworthy is the mention of the commissioners of the Order of Santiago, in a visit to Almedina, to “Hernandiáñez” among the residents of the municipality, which was a recognition of nobility.

We can appreciate its Leonardesque style in The Epiphany of the Chapel of the Knights of the Cathedral of Cuenca, about which Antonio Ponz, before knowing its authorship, wrote that “it must be by Leonardo Da Vinci, and in any case by some famous man of those who went to study his work in Florence ”. The paintings for the doors of the altarpiece of the Cathedral of Valencia, which Yáñez carried out together with Fernando Llanos, put him in direct relationship with the master Leonardo, as there are documentary news from 1505 that mention a “Ferrando Spagnuolo, dipintore” working in Florence with Leonardo, in the paintings of the Great Hall of the Council of the Lordship.

Fernando Yáñez de la Almedina is a great internationally known Renaissance painter. His works are characterized by the features of this style (sfumato, sweetness of the faces and gestures), formal clarity and a serene and calm attitude. He paid special attention to the qualities of the clothes and objects, a typical feature of the Flemish tradition, common in the Spanish school.

His most outstanding works can be visited in the Prado museum: Santa Catalina de Alejandría (his masterpiece), San Damían, Santa Ana with the Virgin and Child, and a panel of the risen Christ and saints appearing to the Virgin.

Also in the Museum of Fine Arts in Valencia you can see various works by Yañez such as The Resurrection, and in the Cathedral of Cuenca, such as the altarpieces of The Crucifixion, Epiphany, La Piedad and the Adoration of the Shepherds.

As a tribute to his illustrious son on leave of absence, the town of Almedina offers an open-air museum of the painter Fernando Yáñez de la Almedina. You will be able to walk the streets of the municipality and contemplate the replicas of a great variety of works by the painter, exhibited on the facades.