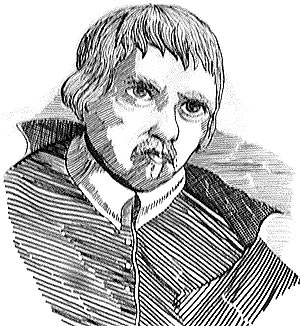 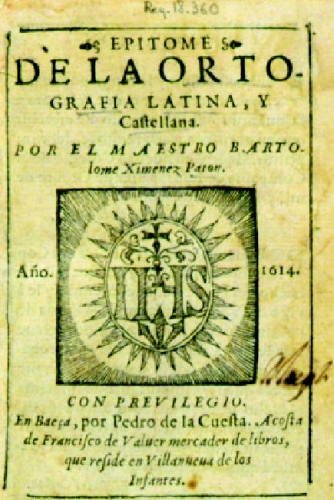 Bartolomé Jiménez Patón was born in Almedina in 1569 in an illustrious family. It can be said that he had a wealth that produced good income, which can be calculated at more than 20,000 maravedís per year.

He studied at the Imperial College of the Jesuits in Madrid, where he was a companion of Lope de Vega, of whom he was always a great admirer.

He studied the Baccalaureate of Arts and Philosophy and graduated as a teacher from the University of Salamanca. During that period, he decided to become a cleric with the intention of ordaining himself as a priest, without succeeding, since the priest of Alcaraz, bachelor Bartolomé Márquez and the judge, lawyer Gutiérrez de Sandoval Ballesteros noticed errors in his ordination process, as well as a problem in his manner. of life. There are no documents about these errors but they are attributed to the dedication of the teacher Patón at that time to the writing of comedies, titles not very close to the precepts such as The Deceived Lovers or El Casamiento Desecho.

After the refusal of his ordination, he married Juana Hervás Mosalve, a neighbor of Almedina. In 1600 he began to run the chair of Humanities and to teach Grammar in Villanueva de los Infantes. He obtained a chair of grammar in 1603 in the Cathedral of Jaén, and gave classes in academies in Toledo, and was related to the circle of friends of Lope de Vega. He was a notary of the archives of the Murcia Inquisition and Mayor of Villanueva de los Infantes.

He commented on and translated epigrams of Marco Valerio Marcial and wrote various grammar works: Brief Institutions of Spanish Grammar (Baeza, 1614) and Epitome of Latin and Castilian Orthography (Baeza, 1614). In addition, he published the most important rhetorical manual of the time: Mercurius Trimegistus, sive de triplici eloquentia (1621). He also wrote various pamphlets such as Costume Reforms (1638) or The Perfect Preacher (1612).

Patón was a prolific author, who produced and published a large number of works. He came to sell four comedies written by him, and delivered two sacramental cars to be represented in Alcaraz.

He made various historical texts, highlighting The History of the old and continued nobility of the city of Jaén, very famous, very noble, and very loyal, guardian and defense of the kingdoms of Spain. Most of this work contains biographies and genealogies of Jaén lineages together with historical facts of the time, without neglecting the landscape, the weather, industry and especially agriculture. It can be considered an authentic encyclopedia of the Andalusian province.

Jiménez Patón’s contribution to philology, not only Hispanic but also universal, is very remarkable. The most interesting thing may be his observation on seseo, being the first author who provided the known description of this term, applying it to the phonetic habit of the Valencians and contrasting it with the zezear of the Sevillians.

At the beginning of the seventeenth century he did not have a very comfortable financial situation and he resorted to dedications of former disciples and friends to be able to publish his works.

Finally he died at the age of 71 (1640), when he lived in Infantes and was a professor of Rhetoric.

Bartolomé Jiménez Patón is considered the great humanist of this land and the author of fundamental philological treatises for his time, as well as various theatrical comedies, poems, etc.